Con-Eventional Stories are recaps of events from the author’s perspective.

Hmm…why do they call it IOI Mall anyways?

Does the name come from poetry that starts off with, “I, Oh I,”?

By the Starbucks entrace into IOI mall, pass the outside setup of what appears to be some roadshow for children, the area known as IOI Mall’s North Court was flooded with booths all over, with spacing to form walkways for the event’s inevitable attendees.

Under the morning’s bright lights from above, penetrating the ceiling’s circular windows, small early crowds of photographers and attendees sat around the blue carpeted surface, awaiting for the event to kick off.

As free time gave way for some early photography to warm up, the camera wasn’t booting in response.

One hectic retreat, and a surprisingly fast bus ride later, the sight of IOI Mall greets one’s window seat, as the bus grinds to a halt for passengers to descend or stick around for the Jam flavoured ride.

Returning into the North Court of IOI mall, the crowd sizes had…changed.

Across the event area’s carpeted zone, crowds found themselves sitting around on their own or with small groups of presumably associates.

While keeping away from the camera stands sat in front of the stage, that occasionally get manned by camera ready folks to record the event’s performances on stage.

Despite missing out on the day’s earlier performance, fortunately there’s more to come from the day itself.

Thanks to a schedule with hours of downtime between segments, the event continued with an introduction ceremony of the event’s guests.

That’s accompanied by varying degrees of applause from the crowds.

And speaking of including crowds, one of the first segments involve having to win at Rock, Paper, Scissors against one of the guests. 👀

A super short lived activity that ended with 2 of the 3 getting Rocked out of there. D:

Leaving only 1 lucky bloke who did not play with Scissors. 🤔

Kind of makes him a cut above the rest.

Speaking of lucky blokes, a consistent stream of empty calls during the lucky draw segment made it…pretty much anyone’s game.

With calls for people’s names who won consistently getting ignored, likely due to those called not being around, eventual winners would show up on stage to claim their prizes at least.

And one lucky bloke who managed to be around for the gift handed to him by one of the event’s guests.

Photobooks handed by the person who made them has that strange sense of honor many long for, but few get the chance to have it bestowed upon them in public.

Throughout the event venue, where attendees flock around either taking photos, getting a look see at the booth merch around them, or just chiling at the event, minding one’s own business was the rule of thumb.

But no booth was consistently crowded with people seated than the one for card games. 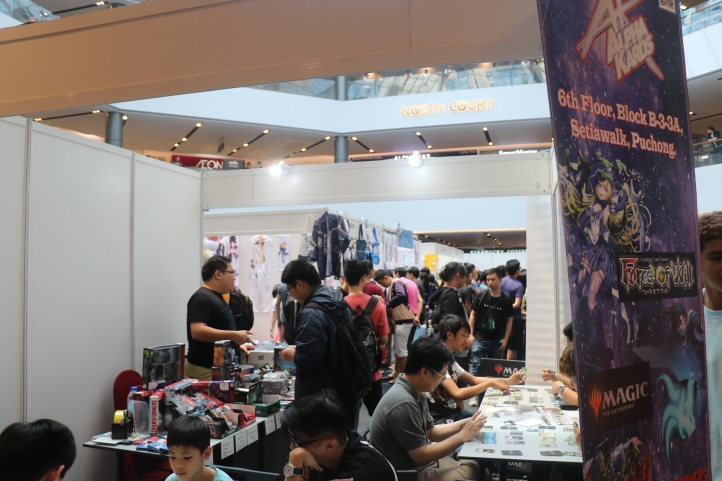 Not Children’s Card Games (Despite what you see in the photo).

The AK Games booth, a name that has way less to do with the names of assualt rifles but more to do with hobby based games, attracted flocks of folks looking to try their hand at their workshop.

For this game called, Force of Will.

A game that demands a Force of Willpower to sit through it.

Some attendees happily picked up some cards, likely due to their enjoyment of the workshop. 🤔

Goddammit, what the F is with that nois-…oh right, the speakers above. 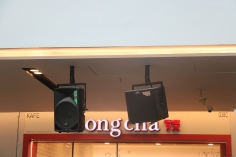 Around the event area towering above like CCTV cameras, speakers from above consistently played out tracks from various Japanese series to fill the venue with literal background music.

As one set of speakers hovered above the AK Games booth, leading one to wonder how much of a nuisciance the sound must be to the people conducting the workshops.

Wonder if there’s a backsta-…oh nevermind. 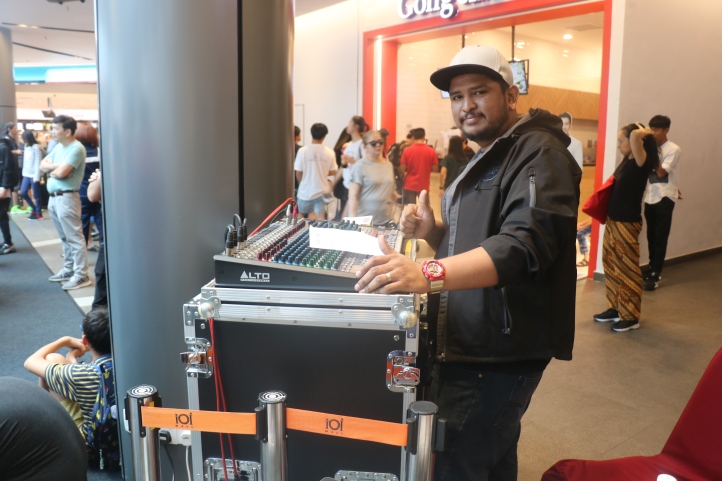 Found the PA system, as the sound eventually fades to play loud enough, without being an annoyance. 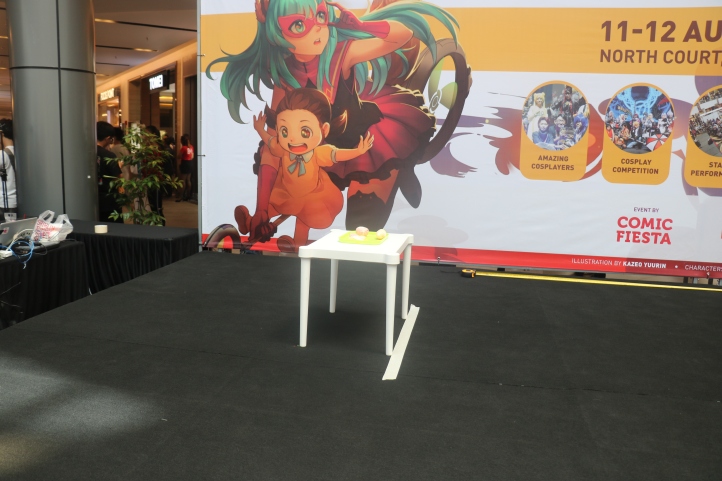 A table behind some masking tape line, housing some toy props.

Oh right, the tableflipping contest, evident from the nearby crowds lining up for the day’s biggest highlight. 😮

And…oh deer, someone broke one of the table’s legs. D;

Least it looks more legit than Neymar’s falls on the Football/Soccer pitch. 🤔

But as a Holiday, thankfully.

As the RapidKL 600 to Puchong stopped earlier this time round, the nearby LRT entrace was the only means to reach IOI Mall from this distance.

Descending down the station’s entrance, the following…revelation, appeared. 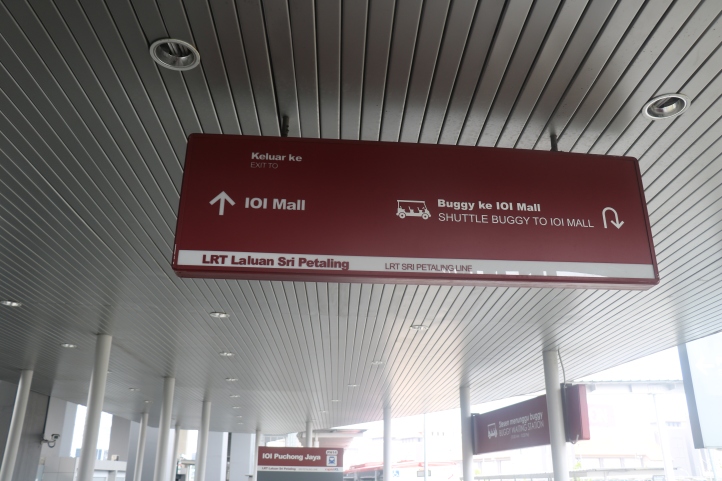 There’s a Shuttle Buggy to the mall?

Who could be lazy enough to not use their legs? 🤔

Before the familiar stage from before, event staff found themselves setting up strips of masking tape across various positions on stage.

With numbers 1 to 3 labeled across each strip.

Likely for the cosplay competition later that day, as that’s usually the reason most folks would even attend the event on a Monday holiday.

But until then, the morning will have to do.

And like the day before, crowds clamor for the day’s first person performance. 😮

Crowd size doesn’t matter, since anyone can sit back and enjoy listening in on a singer’s tunes.

As another round of downtime commences, so too did the urge to visit le booths around. 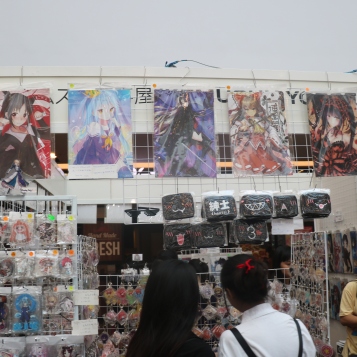 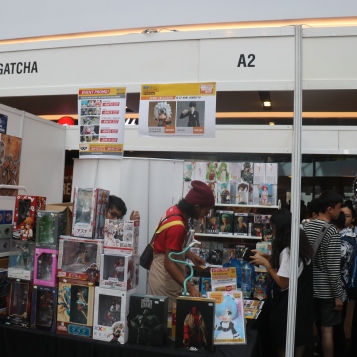 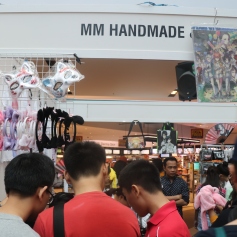 From the usual pool of stores that trade in Anime figures or merch, often crowding the life out of the small event area. 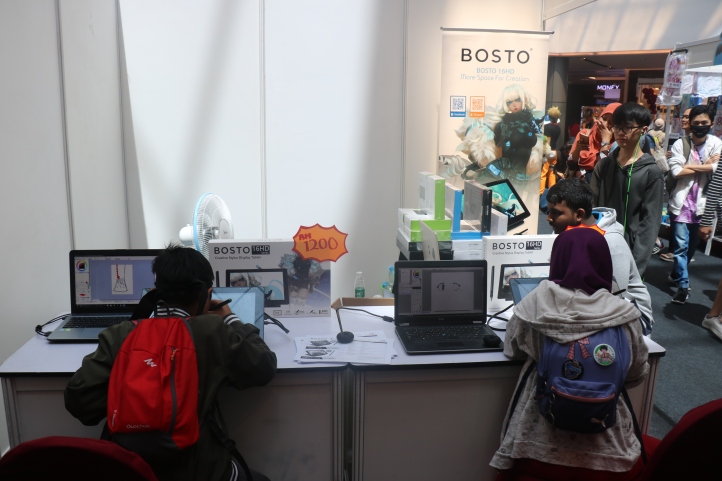 To an artist booth for folks to try their hand at some tech related to drawing stuff, as attendees pass by observing artists at their work. 😮

Or to a place of Butter flavored Spoons, without actual spoons.

Or of course, lining up for the usual meet & greet sessions with the guests during their time available, over by the Coffytiam booth.

Flocked by event staff giving them the umbrella treatment, as cover from the towering sun rays above.

Apart from meeting guests, the Coffytiam booth was the same place where many flock to acquire the highly anticipated prizes of,

Reason for no pics on Day 1, was because it got sold out.

Strange that the tickets didn’t sellout for Day 2. 🤔

Events would often see guests or performers take the stage to do their stuff, but often times, regular folks would take their turn on stage too.

Especially the fine folks of the cosplay contest.

As the judges set themselves up for their role in passing judgement, camera wielding attendees all around prepared for what’s to come.

One by one, contestants take their turn on stage as their name gets called up, with costumes of all sorts suited up for the show.

The masking taped surfaces from earlier indicated where they should be move to next for their poses, like a fashion show-ish format, but with costumes people would love to suit up and show the world with.

Like many great things that come in unusual timings, an end is inevitable.

On this Monday holiday event, 4 days before another event that weekend, there’s a sense of…fulfilment.

In seeing this 2nd iteration of a “Comic Fiesta Mini but not really” continue doing its stuff.