Con-Eventional Sidetracks are recaps of events from the author’s perspective, BUT.

It does not include the full experience of all days at the event. D:

Credits to various sources for the various images, videos and/or posts seen here.

I DO NOT own the rights to any of these, if mentioned.

ALL rights belong to their respective owners.

Towering above passing visitors of this here Evolve Concept Mall, an overhead signboard name drops the identity of this LRT station.

With the right eyes, one can see the most Ara part of Damansara. (☞ﾟヮﾟ)☞

In the midst of this Day 8 of Chinese New Year, comes an early morning crowd of attendees chilling outside the Grand Pacific Event Hall.

The site of past Season4Otaku events, with a toilet setup attached right outside the Event hall, is already miles better than the previous year’s Lightbox. 🤔

Dropping by the frontline counter, the request for an event ticket takes awhile to get going.

But for RM 20, it eventually comes with the usual paper wrist strap,

And a Chinese New Year red packet, with a green easily removed Season4Otaku sticker sealing it.

A Lucky Draw number #365, and a bunch of…discount coupons for event stuff.

This is starting to feel a lot like ACE from last year.

It’s held in February, they’re giving red packet freebies and uh…it’s even emceed by the same Emcees looking to make this a chilled event!

While the hall’s front doors await its 11 am Malaysian Timing opening hours, the nearby setup of motorcycles make for a temporary tourist attraction.

As part of the Malaysian Itasha Movement’s arsenal of fabulous looking vehicles decked out with anime series all in place of the paint job.

One wonders how legal are these bikes to ride publicly. 🤔

A question answered by a fan of motorized bikes, explaining this special permit one can apply at the local JPJ* office.

Once permitted, anyone’s cleared to flex their anime coated bikes across the country’s roads, to take them home, because it’s the place they belong.

Huh, no wonder some folks call their motorbike a Girlfriend.

Way to make someone ask the question, “What did Yusei?”

Upon entering the event hall…

No wait, that didn’t sound right, one more take.

Upon entering this GRAND Pacific Hall, that doesn’t involve a trip into the actual Pacific Ocean, comes tables flooding the carpeted surface, with absurdly wide spacing for attendees to run around.

Crowded? What’s that, a flavor of canned sardines? 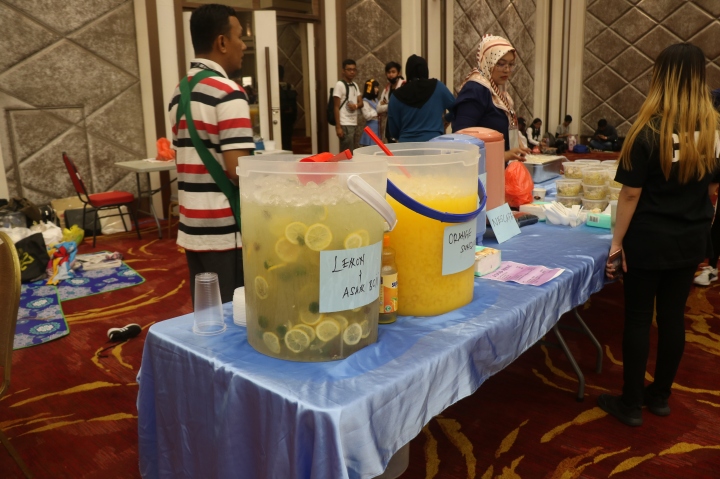 They don’t do sardines here, but they do food booths of surprisingly decent selections for brunch (Breakfast/Lunch), lunch, or linner (Lunch/Dinner).

As before the stage laid a table with 3 Bleach themed cosplayers fiddling with papers of sorts, preparing for some kind of judging gig.

Perhaps this contest they’re judging will show itself sooner or later, as the call the explore the artist booths all around awaits!

…after dumping all this luggage bought along for this one-day trip…god the back hurts.

Following the previous Season4Otaku’s record of housing Artist Booths aplenty, this year’s set of artists are armed to get quite the attention. 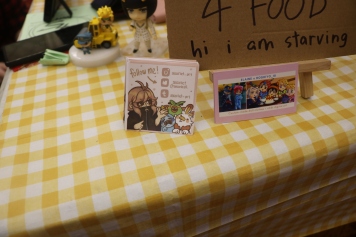 A whole lot of signs to be paid in attention.

With some folks trying out some, alternative attention grabbers.

Truly artists of culture, that don’t wind up pissing off 7 Generations of Starters, whilst reminding folks that it is the Year of the Rat.

If only events started highlighting some of the goofy stuff artist booths like showing as part of their charm. 🤔

Upon headed for the towering exit doors, comes a…ooh?

Under the sponsorship of the Craft Lab Malaysia folks, that welcomes cosplayers to fix up various damaged and/or broken parts of their costume.

It’s not a Malaysian event unless the response to the Emcees asking, “Sudah Makan Belum?” (“Have you Eaten?”, in English), is met with a resounding,

From the sounds of things, the day’s first stage highlight’s about to kick off, with this Pop Culture Hiroshima gig, a cosplay skit contest where the winners get to represent Malaysia in Japan for some…stuff, in Hiroshima. 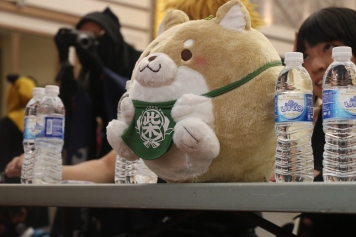 As the judges pause for a quick pic, before getting to do their jobs of assessing the day’s performers.

With a fluffy ball of a…is that a doggo?

Being part of the judge table’s lineup, surely he’s a judge too right?

“We don’t need 4 Emcees here,” mentioned one of the Emcees during the Judge introduction banter.

Of course not, yall need 5, this is Season 5 of Season4Otaku, duh.

Speaking of 5, comes 5 rounds of cosplay skits to take the stage! ;D 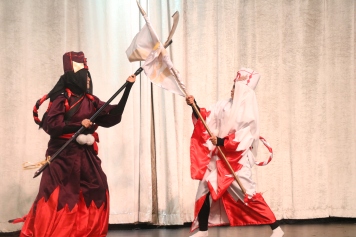 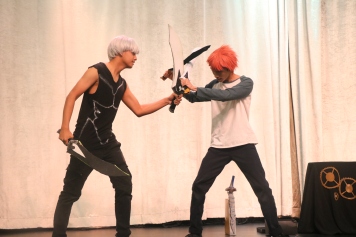 With some Fight Morning themed skits of action that syncs with the background’s sound effects.

“Oh heaven, tell me why!” recited one of the Team Queen Members during their skit, a line who’s answer was not “Ain’t nothing but a heartache.”

…how else do you answer that question?

Whereas the Fate series themed boys brought along with them some, projector screen support.

Which plays clips from one of the Fate series anime that involves uh… Unlimited Blade Works or something along those lines.

Wait, isn’t that red haired protag the same bloke that says “People Die when they are killed?”

Why was that line skipped?! D; 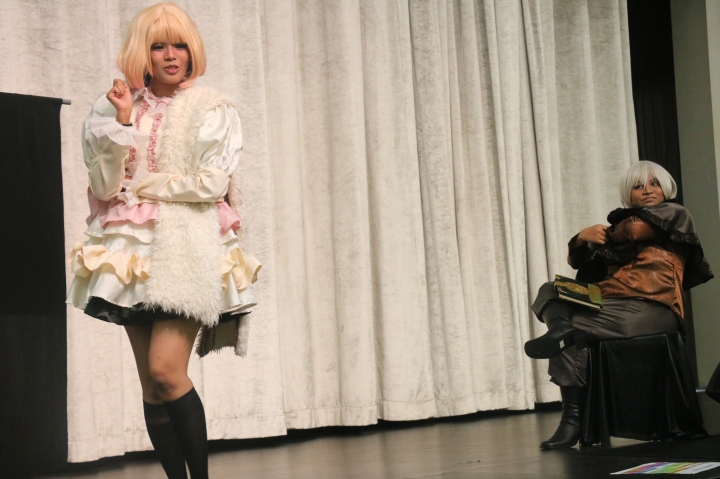 In a more intriguing twist of skit performances, comes one based on that uh…actually better not mention the wrong name here.

But what makes it stand out is that it takes place entirely in Bahasa Melayu (Malay language), something you don’t often see for skit performances.

Granted, it’s likely due to rules and stuff that Bahasa based performances never happen, yet it’s worth noting nonetheless.

It’s even bought to you by,

Credits to Khairul Hazim Zainudin for the video. Source.

An image you can hear… 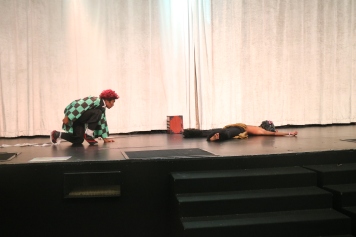 If the earlier fight based skits weren’t enough, the last two serve to remind audiences that Kimetsu no Yabai/Yaiba’s popularity was explosively good.

To the point that one team was dishing out some man on man wrestling move action, with constant body slamming action on stage.

Whereas the other has some…uh. 🤔

…okay this is what happens when one doesn’t do their anime homework (The Author, disclaimer), but basically.

Apparently, the main character’s demon possessed sister beats the sheet out of a cardboard cutout demon on stage, which leads into a “I know you’re somewhere in there!” moment of trying to knock sense back into the character.

…starting to think the author for Kimetsu no Yabai/Yaiba was a huge fan of this Dynasty Warriors scene.

With the Pop Culture Hiroshima segment dusted, the audience settles back around this absurdly spacious hallway to browse around the event’s various attractions.

While throughout the day, one act after another takes their turn to keep the entertainment going, with generous amounts of downtime in between.

…but before the acts kick off, there was time to check out one important detail.

That round stuffed toy doggo from earlier, who comes with a text of paper that says, “My name is Pochi.”

Darn…should’ve bought a Yoshi along for the visit.

But sicknesses named after that Beer from Fast & Furious be rampant yo. D;

Like the previous year’s round of balancing content, comes an Instrumental Performance of ancient Chinese string instruments, that sounds eerily similar to ancient background music from across Asia. o.o

Or European sounding violin tracks, the kind you hear when sailing down the nile.

Maybe that one attraction from Europe might be made in China too.

Truly a fitting theme for this Season4Otaku’s revisit to ancient times. 🤔

Up next comes a Cosplay Workshop by the folks of Team Kumabear, giving a kind of local take on these usually formal sounding workshops.

Which fits and makes sense, since not all folks would be familiar with full formal English.

But all be familiar with Malaysian tier English, or Manglish as some folks call it, to piss off the country’s former owners too busy having Brexit-fast. 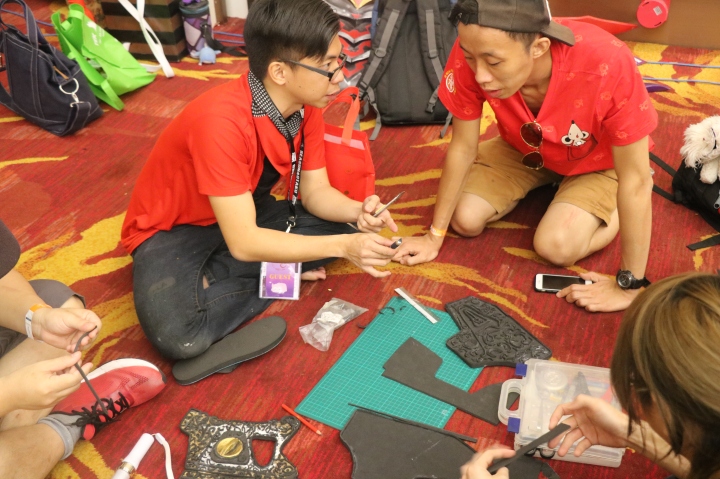 What makes the workshop segment cooler, is how the host is still free to conduct a more personal explanation to folks interested to have their answers answered after the workshop’s over.

It gets better, with a wide amount of space by the stage to conduct this one on one session with folks. (☞ﾟヮﾟ)☞

For folks wondering what’s up with the Twin Tails, it may or may not be part of Mr Johan’s 20th Anniversary since he started performing on stage.

If there’s one thing to say, it’s truly the manliest voice for the Handsome Voice.

What’s that up there? As a figure standing high above the PA system room waved towards the folks looking up from below. o.o

Is that the G-Man?

A good reminder that Half Life: Alyx is coming out soon this year. 👀

Here’s to hoping it doesn’t wind up like an Artifact.

If there’s one thing that got the attention of folks, it’s this one sort of improvised segment that involves an unfortunate bystanding Emcee.

One half of the GG Twins, with a seemingly unknown lady accompanying him on stage, as Emcee Dante explains,

“We would like you to re-enact the night you proposed to her.”

A statement greeted with enthusiastic applause, at the expense of the married couple on stage.

But they would not disappoint. 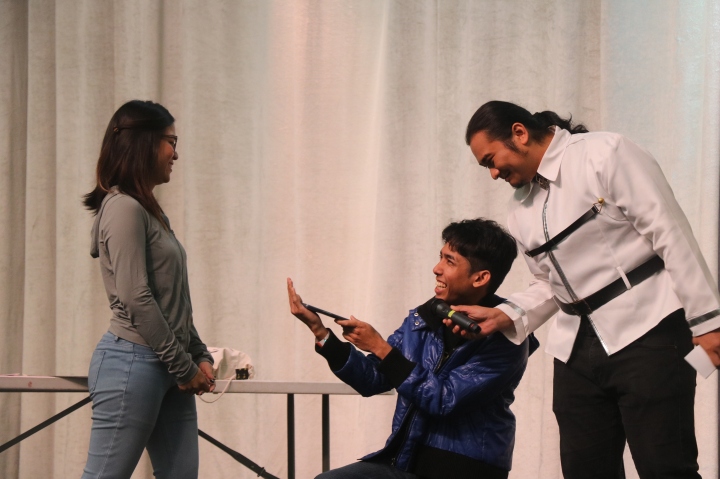 As a rough re-enactment went off without a hitch, with his proposal blasting across the event hall’s speakers across all 4 corners.

A segment that ends with them declaring something special to happen at a certain Space Themed Event at The Mines later this August.

And that about wraps up Season4Otaku, this is Day 2 after all. ._.

Huh, wonder what the folks outside are doing?

Oh right, of course someone brings a speaker to get the locals outside dancing to dank beats they can find on Facebook.

It’s always neat to see that sort of stuff entertain even folks not part of the speaker owner’s close circle. (☞ﾟヮﾟ)☞

For a less Event Simulator version of this, check out An UnCon-Eventional Sidetrack: Season4Otaku (S4O) 2020