UnCon-Eventional Sidetracks are event recaps more on the event itself than the experience, BUT.

It does not include the full experience of all days at the event. D:

Credits to Season4Otaku (Source) for the featured image, and the various images and posts seen here.

I DO NOT own the rights to any of these photos, if mentioned.

ALL rights belong to Season4Otaku, and other respective parties.

This Season 5 of Season4Otaku returns.

To…the place where it all started. (☞ﾟヮﾟ)☞

Wait, doesn’t that make it Season1Otaku? 🤔

Season4Otaku 2020 is the 5th Season/iteration of…well, Season4Otaku, as this year’s event pushed the theme of, and I quote, “Back to Ancient Times.”

…so, someone’s gonna dig up some Ancient Aliens, Egyptian God cards and/or Kamen Rider belts for this?

Spoilers, none of the above mentioned 3 show up. D;

Although, they did reveal a mascot for this year’s event, coupled with a brief origin story behind the mascot.

Credits to the S40 Boss Lady for answering the inquiry.

It is a floofy alpaca. 🤔

Not much to say here about the organizing folks other than well again, they have a mascot now. 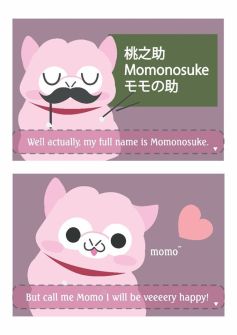 Credits to Season4Otaku for the photo. (Source)

…for those of you feeling your manhood’s being challenged because of the color, you can start running for the hills now.

Or don’t think of it as pink, but rather, light magenta.

Held on the weekend of February 1st to 2nd, some would call Season4Otaku 2020 the 1st event of the year.

Day 1 of the event was unfortunately, also Day 7 of Chinese New Year, which involves some cultural prayers thing to a Sky god or something.

…to explain it poorly. D;

Hosted at the yet to evolved any further, Evolve Concept Mall’s Grand Pacific Hall, over at the most Ara part of Damansara, comes the same site of Season4Otaku 2018.

The same venue that sold the idea of what kind of event Season4Otaku was like.

And it’s already way better than that goddamn Lightbox venue from last year.

Speaking of Lightbox, here’s a quick note about why S4O 2019 found itself there instead of continuing here, from the organizer,

“In 2019, the venue here (Evolve Concept Mall) had a contract with another event at the time.”

That adds up, venues tend to host more than just 1 event every year, so clashes are unfortunate but inevitable.

From what we understand, Season4Otaku comes across as one of those small scale, community run organizers, that usually play their yearly one event card, and…that’s about it.

What makes S4O interesting, is how it’s referred to as that event from the ‘Old Days’, a reference to what events were like in the early days of the ACG Events scene, I suppose.

And it’s true, as there’s a strange lack of going full formal with itself.

The organizer had this to say too,

“We try to make it fun and simple, to make it not as formal as other events.”

That’s not to say they don’t present themselves professionally, just that it’s a very casual kind of professionalism.

They even had the mascot do an interview to address the dress code.

Which says a lot about how much an organizer understands the audience they’re catering to, based on the way they present themselves.

Also oh…so that’s why this year’s theme was “Back to Ancient Times”.

A Gu Zheng Instrumental performances by, 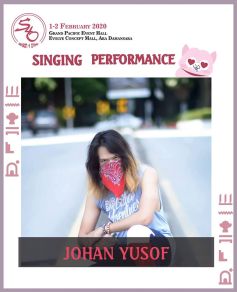 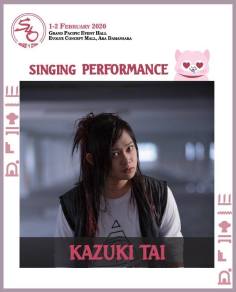 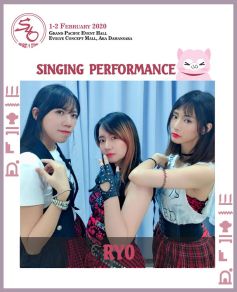 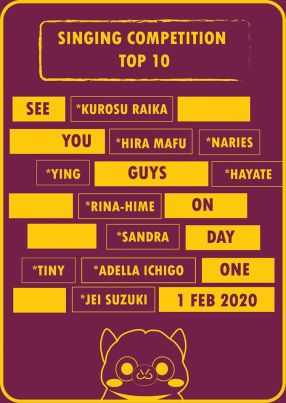 The Top 10 finalists of Season4Otaku’s Singing Competition, with the following judges,

The Pop Culture Hiroshima qualifiers, opened for registration, with the following judges taking the stand,

Additional folks to the event, including,

A Special Exhibition, by the Malaysian Itasha Movement.

Basically those fancy cars/bikes that are legally allowed to dress up in anime husbando/waifu paint jobs.

A pretty good attraction, in the form of a Cosplay Medical Centre for prop fixing.

With the condition of having props being checked before entering.

A whole lotta Artist booths setup all over the place, with space for uh…what’s the word that measures space….

But also a Food Menu of quite a decent selection that, spoilers, come with discounts that we’ll get into later. 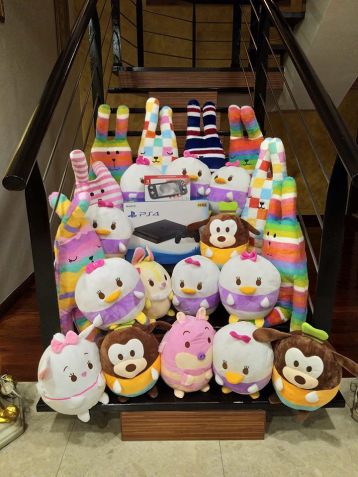 And of course, as is tradition the annual Lucky Draw giveaway of plushies, and…consoles.

The God Goods brings you ALL the best bits an event has to offer!

Please keep in mind this is only for the current iteration of this event, which may or may not repeat for future events.

I love it when venues have food vendors.

Even more surprising are the ones that aren’t just good, but also give ye a small discount for attending this paid event.

Rm 2 off a meal might mean jack shit, but that sort of comes as part of the event ticket’s benefit.

Which is worth noting, because nothing beats the combination of food and discounts.

Nothing sells an event’s identity as well as a Mascot, and it’s brilliant S4O finally has one to show for their brand.

It’s weird that it took them this long to finally have one, but better late than never.

Now, I wonder if you could add the letters S4O onto Momo’s fur/cotton/wool. 🤔

We don’t know much about this Pop Culture Hiroshima thing, other than the fact Season4Otaku plays host to the Malaysian Qualifier.

It’s no WCS tier event, yet there is still a certain level of prestige that comes with being able to represent your country on an International level.

And it says a lot about an event’s quality, if it’s able to play host to things like a qualifier.

Much more than an event that can’t even last 1 day without crashing into a storm made of shit.

Without its permission too.

Or “I need Healing”, for yall other FPS chaps.

But yes, the Craft Lab MY’s cosplay medic station, holy F why isn’t this a more common attraction at events?

You’d think that something like a stop for folks to adjust, tweak or learn something new about prop making/maintenance would be super useful.

I mean, I don’t cosplay at all, yet it would cool to learn some things about how do props work.

Way more beneficial than those vendors of pirated goods that don’t give anything back other than avoidable event traffic jams.

One thing that most folks seem to pretend doesn’t exist in ACG events is that, traditional performances have no place in these events.

That Gu Zheng Instrumental performance from earlier? Yeah, that kind of stuff.

They did that for Season4Otaku 2019 too, which is pretty great.

Which showcases one thing that the ACG events can do, have like traditional cultured performances go with the kind of pop culture stuff most of us are familiar with.

And here’s the best part.

It’s just a matter of finding the right kind of stuff to add in.

No one said traditional performances are forbidden from being part of an event’s performance pool.

It’s not compulsory, but very cool to indicate that ACG scene content is more than most stereotypical expectations.

The Bad Blehs brings up some…bad stuff, about events, which need to be talked about since no event is without issues that can’t be fixed for the future.

Future Organizers , you can learn a thing or two of what not to do at your event here. (As a guide, so that you’re not too busy repeating history.)

Please keep in mind these are only for the current iteration of this event, which may or may not repeat for future events.

Those of you who attended Day 2 of Season4Otaku may be familiar with that shtick they did for the Lucky Draw giveaway.

In which a false story about the prize being stolen because the narrative then.

I’m aware it is a joke, they even sort of clarified it as a joke, yet…it’s very easy to sell a joke as a kind truth especially in the context of a place like Malaysia.

Especially when you brought up the topic about Police Report…uh…

I’m not going to fault specific folks behind this too much, but will say that this could’ve been handled better.

I was there until the end, just to be clear, and don’t mind getting anything.

But please avoid these kinds of jebaits to the audience, if ye can.

Even if it’s known as a joke, you are guaranteed to mislead people in certain regards.

This is kind of weird, but the rather last minute nature of ticket sales made it a bit um…surely you guys could’ve started the ticket sales earlier right?

Even though the event opens at 11am, what’s the harm in getting people their tickets early?

Since early attendees would know to go do something else to kill time until the doors are opened for action anyways.

Hell, when we arrived at 10am, the ticket counter only started selling tickets around 10:30ish.

That’s a rough estimate based on my memory, but it was definitely some time after 10am, which is just…weird, I mean.

You have staff at this table that’s essentially the ticket counter but, aren’t opened for sales yet because…why?

The point is, perhaps having the counters opened early might not be a bad thing, since where else are attendees who paid for tickets going to go?

Home after spending money on tickets without attending the event?

No one is that crazy to burn money on something and not use it.

For some reason, there are audio issues I’ve noticed with Season4Otaku, mostly in terms of volume.

The stage segments aren’t the problem, it’s the bloody sound issues that make these segments come with problems that really shouldn’t have existed.

Even during intermission downtime, the background music playing is on a volume of annoying noise than decent sounding tunes that helps set the mood.

Someone call the World Ends with You chaps to deal with the noise please, F Square Enix’s disinterest in an actually good series.

That aside, just pay attention to the sound volume is what I can sum up here, as how sound is presented in a small scale venue like this can brick an event unintentionally, if handled poorly.

That said, for an event that’s been around for the last 5 years, a Season 6 would likely follow.

And yes, we’re still going to refer to each year’s iteration of Season4Otaku by their season number. (☞ﾟヮﾟ)☞

There’s a certain charm a small quiet, and spacious event brings to the scene, while being reminiscent of what some folks call, ‘The Old Days’ of events.

And that’s what a Season4Otaku brings to the table.

An event who’s size means nothing, if it means good content to check out or participate in.

Wonder what the event is like in the field? Check out A Con-Eventional Sidetrack: Season4Otaku (S4O) 2020