UnCon-Eventional Stories are event recaps more on the event itself than the experience.

Wonder what the event is like in the field? Check out, A Con-Eventional Story: Nowadays Anime Festival 2019

Credits to the Nowadays Official Facebook (Source) for the featured image, and the various images seen in this post.

I DO NOT own the rights to any of these photos (If mentioned), ALL rights belong to Nowadays.

The FAQ is this?

Let’s get one thing straight.

…I can’t even make up this jojoke reference if I wanted.

NAF is a One Day Event held at Quill City Mall on September 15, 2019, on the fine long weekend all thanks to Malaysia Day on the 16th.

But unlike previous two shows at Quill City Mall, this one’s both free and literally grounded on the ground floor.

Credits to Nowadays for the photo. Source.

Announced on July 8th 2019, Nowadays Anime Festival came into the scene with plans for their 2019 show, following an apology for their 2018 show.

And an announcement that the event will be handled by the folks over at Fullmoon Entertainment.

…which explains their logo on the event’s photo. (See the Cover Photo above.)

It’s worth noting that NAF’s posts about Registering for their event, be it for Booths or Volunteers, that each one would be accompanied by a Mascot.

In this case, Lopnie, the Art Booth Mascot.

As he explains NAF being a Free Entry kind of deal.

Spoilers, he…kind of shows up, but in a Cardboard Cutout. 🤔

But Cardboard Cutout idols aren’t what you see here Nowadays.

Rather, it’s the mixed cast of Guests and performers that take the role of the event’s attraction.

What a CoinciDance, because that’s what the next lineup of guests…sort of do. 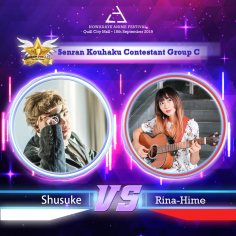 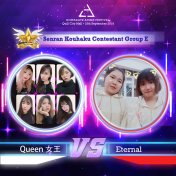 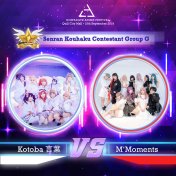 With plenty of familiar solo performers/groups seen in action throughout the year, you’re bound to find an act to look forward to.

Group A – Chai CEO! VERSUS, Keefe!

Group B – Vocadoll! VERSUS, ENNEA! 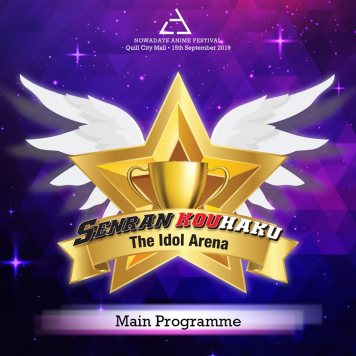 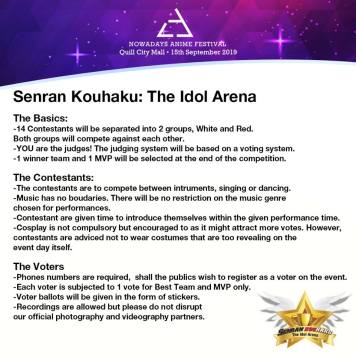 Under the team colors of Team White and Team Red, these pefroming folks do battle for NAF’s Senran Kouhaku, a contest that’s basically like AMG Idol. 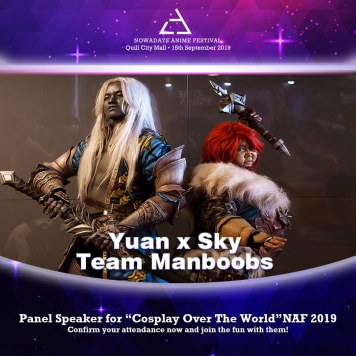 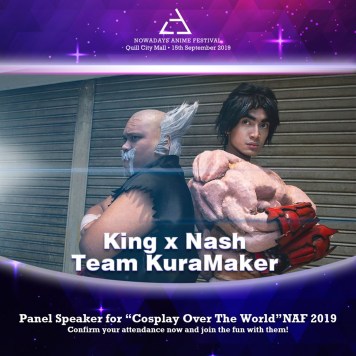 Standing alongside their Malaysian WCS 2019 brothers Team KuraMaker, comes the Malaysian WCS Alumini of Team Manboobs for the Panel Talk, “Cosplay Over The World”.

All in Live Action High Definition that you don’t need no camera blocking your eyeballs to see.

For hours of dank memes and occasional public ‘burns’ and/or ‘oof’ moments. 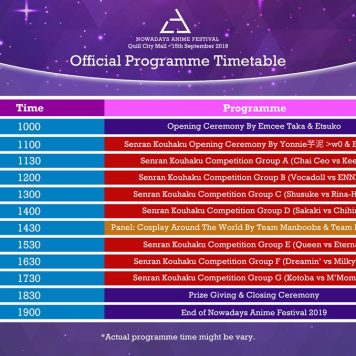 Last but not least, the obligatory Schedule/Timetable that’s timed by Malaysian Timing, and the Floor Plan that features quite a spacious but tight knit area for Quill City Mall’s Ground Floor setup.

What is this, Primary School? >:

The Good Goods brings you ALL the best bits an event has to offer!

Please keep in mind this is only for the current iteration of this event, which may or may not repeat for future events.

In all seriousness though, for an event that’s set at Quill City Mall’s Ground Floor, which is kind of unusual considering that most events so far have often used the glorious 5th/6th floor ballrooms up top.

Nowadays Anime Festival is actually pretty cozy in terms of the layout and spacing during its event.

Across the Carpeted zone where the event takes place, there’s always room to move around and stuff.

And some room for a camera crew to setup some photoshoots near the front entrance.

Barring the front of the stage of course, that section’s packed by default.

In short, pretty good site for the event I’d say.

Quill City Mall being a public venue makes it difficult to go full informal when it comes to content, so some level of professionalism is needed for Emcees taking that kind of stage.

But credit where it’s due.

Emcees Taka and Mori did a fantastic job despite the show’s 9ish hour session, give or take a couple of hours.

Emcee Taka’s clearly no stranger to the scene, with the way he occasionally calls out to attendees that clearly know him, only to be ignored. :pepehands:

It’s kind of great to see Emcees being able to interact with folks that clearly know them,

Emcee Mori, being back in action shortly after her previous Emcee gig, presents event content with formal professionalism, which compliments Taka’s way of interacting with the audience.

Of course, she does get in on the whole public burning of Taka on occasion.

This is before you talk about the Giveaway segments, and the public improvised promotion of some attendees/propmakers that happened to be there. 🤔

But it’s worth noting nonetheless.

In short, I want to say that both of them synergize pretty well on stage, although it’s unclear how much of the content is improv/rehearsed, it’s great to see this kind of stuff in action.

The feature length lineup of 14 performances is a pretty great idea.

It’s basically, if you boil it down to it, AMG-Idol, only it’s kind of not that too.

Given that almost every round would feature a different performance, rather than one type of performance to see out of all 14 lineups.

In short, I kind of dig the idea of a performance that showcases a wide mix of stuff with each round, which helps give the show ALL THE VARIETY.

Could consider Music Bands for the next one if that’s an option.

Now, one thing I kind of did not expect was to hear the Emcees sort of promote the nearby events happening at Quill City Mall at the time.

Basically, that Sunday, there were two other events ongoing at the time.

A Live Broadcast of some Street Fighter V Competition to watch publicly, and a blood donation drive hosted by some Malaysian…uh, I think they’re Personnel to the army?

Not too sure where do they hail from specifically…

But point is, I’d say it’s kind of neat to know about events nearby.

How much of this is an obligtation to Quill City Mall we will never know, but ultimately, it’s notable to know about.

Also Blood Drives are always good for folks who can give. 🤔

The Bad Blehs brings up some…bad stuff, about events, which need to be talked about since no event is without issues that can’t be fixed for the future.

Future Organizers , you can learn a thing or two of what not to do at your event here. (As a guide, so that you’re not too busy repeating history.)

Please keep in mind these are only for the current iteration of this event, which may or may not repeat for future events.

We tend to talk a lot about events and positioning, because we do believe that if there’s one thing events can work on to ensure less trouble, it’s the positioning. 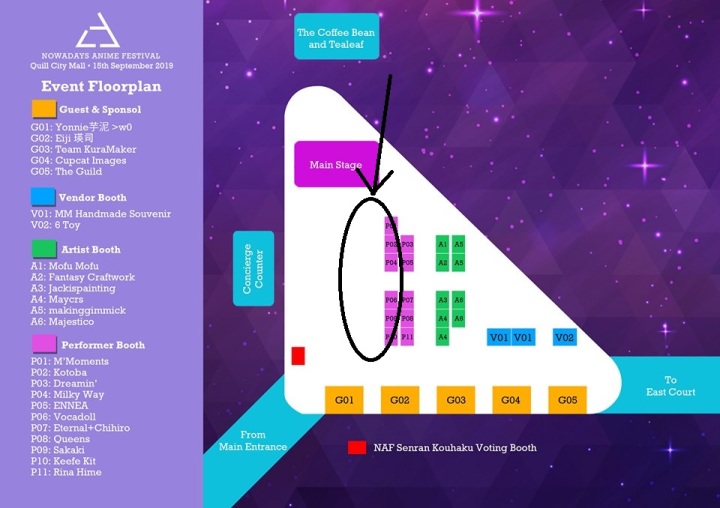 The problem we noticed during NAF was the issue of people sitting in front the booths, near the stage area.

Granted, you could still move around that area, but it does get kind of hazardous to get around without accidentally stepping on people.

One solution I can suggest, is well, why not rotate those booths, such that in the event people still sit close to those booths, they won’t block the front, but rather the sides instead.

Also, with the small spacing between each booth, the people manning said booths can get around anyways even if the exit near the stage area was blocked off by sitting attendees.

With the amount of free space available at the venue, most notably the area behind V01 and V02, it comes across like unused potential is all.

Point is, there’s stuff you can do to fix up the positioning. 🤔

For everytime a Technical Difficulty happens.

Not really a big issue, but worth considering for a drinking game.

The most Natural Alcohol.

Thankfully, this did not affect the performances, but did sort of consistently happen with the Mics and stuff.

Again, not a big deal, hardware gets weird at times.

Unrelated to NAF 2019, but it’s worth putting this out.

I don’t know who the Fuck you are, person who changed the terms of the Booth Deposits from NAF 2018.

But it is kind of a dickish move that…I didn’t know you study under the Dashcon School of Changing Event Rules Without People Knowing.

That’s illegal, and while a lawsuit won’t know who to aim at (For now), let’s just say it’s not something that should exist.

I will also say this, it’s clear that someone else is also involved, but whoever they are it’s not in our place to hunt them down. (Yet.)

Point is, Organizers, don’t do this.

It’s F-ing illegal, kills your trustability and ensures future folks would stay the F away from you. 🤔

One way to avoid this mess in the future for booth or artist vendors, is to well, request or demand a photocopy of the event’s T&C for booths.

That way if an organizer tries anything funny, they have only themselves to blame for changing the rules behind people’s backs.

If an organizer has nothing to hide, then something as simple as T&C for booths/vendors should be enough to give out, given that you guys kind of fund their events so…that’s a decent security measure.

But if an organizer says can’t, then maybe some alarm bells should be rung. 🤔

Hey, is that the sound of the FBI in the. dist-…*looks at Incognito History*

I can say with confidence that, Uncertainty is in the air for NAF’s 2020 sequel.

Despite the Fullmoon Entertainment folks being brought in to host this year’s show, it was mentioned by one of the folks at the event, that it’s uncertain if they’d continue their partnership with Nowadays for the future.

But arguably, less evil and damaging than some bullshit that makes International News.

Point is, NAF’s sequel depends on a LOT of factors.

But the most important being, IF Nowadays would continue working with Fullmoon Entertainment, or alternatively, can find another band of folks to host the event again.

Personally speaking, I do have a fondness for events that try to do a 1-day show well, so they can improve and sell the next one better.

Events aren’t easy to do, that’s why we don’t do that.

I will say this.

Despite the 2018 pickle, and/or S-hit show (Depending on your view on the matter), this is the first example of a comeback event we’ve covered so far.

Meaning, it’s an event marred by some bullshit before, but still manages to pull together a sequel to surpass the previous shitshow.

Which is pretty good, since it shows that events can still be done well.

There are exceptions to events that should just kick the bucket for good, but that’s a discussion for another time. 🤔

Quality is not perfect of course, there’s only so much you can get out of a “Free to Attend” event.